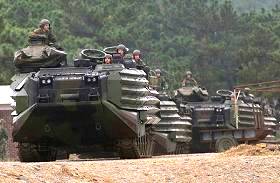 hile there has been "staggering" diplomatic activity on the Korean peninsula in the past year, North Korea's military has the potential to become far more lethal, the top U.S. commander in South Korea told Congress.

North Korea so far "has yet to discuss or implement any meaningful military confidence-building measures beyond agreement of the opening of a railroad corridor through the Demilitarized Zone," he said. Schwartz said 70 percent of the North's army  "approximately 700,000 troops, over 8,000 artillery systems and 2,000 tanks"  are based within 90 miles of the DMZ and are being reinforced. Most are positioned in more than 4,000 underground facilities from which they "can attack with minimal preparations or warning," he said.

Without moving any of its more than 12,000 artillery pieces, he said, "Pyongyang could sustain up to 500,000 rounds per hour against Combined Forces Command defenses and Seoul for several hours." Most dangerous, he said, "is the accelerated deployment over the past two years of large numbers of long-range 240mm multiple rocket launchers and 170mm self-propelled guns  along the DMZ." 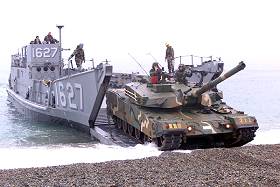 North Korean military training levels over the past two years have been "record-breaking," Schwartz said. "Immediately following the June 2000 summit (between South Korean President Kim Dae-jung and North Korean leader Kim Jong Il), the North Korean People's Army training cycle in the summer of 2000 was the most extensive ever recorded. It was preceded by the most ambitious winter training cycle for the past 10 years," he said.

He said Pyongyang's ability to attack the South "without warning and (with) nonconventional weapons continues to grow bigger and get better." The North has the world's third largest ground force with 1 million active-duty soldiers, an air force of more than 1,700 planes, an 800-ship navy that includes "the largest submarine fleet in the world," and a 6 million man reserve force, he said.

Although the North has held to its self-imposed moratorium on missile launches over the past year, he said, it has continued to produce and deploy Rodong missiles that can target anywhere in South Korea. Pyongyang also is continuing improvement work on its 1,240-mile-range Taepodong-1 and 3,100-mile-range Taepodong-2 missiles. It has the ability to fit chemical and biological warheads to its missiles, he said.

He called the North's special operations forces "the largest in the world" with more than 100,000 men. "During wartime, these forces  would fight on two fronts, simultaneously attacking both our forward and rear bases," he said.

Schwartz told the senators that training is the only way his command can maintain the readiness to combat the North Korean threat. "The loss or reduction of dollars to support (training exercises)," he said, "will weaken readiness and deterrence and hamper our combined forces training to fight and win."