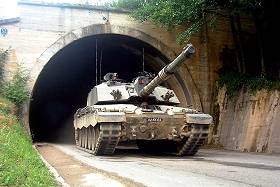 he age of the heavy battle tank is over, says the senior officer in charge of the British Army's weapons. Since its introduction on the Somme in 1916, the tank has been regarded as the master of the battlefield. But with the increasing sophistication of modern weapons, especially the attack helicopter, its influence has declined, according to military experts.

A different political climate, including the end of the Cold War, has also influenced strategic thinking on its future. Maj-Gen Peter Gilchrist, master general of ordnance, made his comments to an international group of officers and defence industrialists at the Royal Military College of Science in Shrivenham, Wiltshire.

He said: "In the long term, we expect technology to allow us to deliver a better capability than current forces from a significantly lighter platform. We believe that the 70-ton tank, manifested in Challenger 2 and other Nato main battle tanks, will have had its day. It will be replaced by a lighter system with greater protection and firepower."

Christopher Foss, editor of Jane's Armour and Artillery magazine, said: "The chances of having an East-West war have gone and, with it, the need for a huge stock of tanks." The shelf-life of Britain's 386 Challenger 2 tanks, which cost £4 million each, comes to an end in 2025. 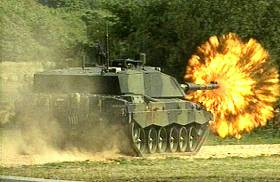 Britain, America and Sweden are looking at a 20-ton replacement that will be air-transportable but retain its firepower and protection. Electric engines would make them smaller and quieter with the average crew reduced from four to two. Stealth technology, including building tanks from plastic which is being developed by the Defence Evaluation and Research Agency, could be used to defend it against "intelligent" weapons.

An MoD spokesman said: "We are looking at what will happen when the Challenger finishes service. We are considering technology that might allow us to have the same punch a tank has but in a lighter form that is air-transportable. This is not the death of the tank but its evolution."

A former infantry officer, who was among the first to enter Kosovo in 1999, argued that the tank was still an important asset. He said: "We knew the Serbs had a significant tank element in Kosovo and we would have to fight like with like."

He said: "The American Apache helicopters kept crashing and would have been very limited in mountainous terrain where the Serbs were well dug in. If it had come to a fight, we would have got nowhere without tanks. When we finally did deploy into Kosovo, putting a tank on a road junction was rather like having a bouncer on the door at a nightclub."

While some still regard tanks as the best anti-tank weapons, it is argued that their size and lack of speed make them vulnerable. Attack helicopters travel at 200mph and their missiles have a range of three miles, allowing them to threaten flanks of armoured formations moving at 50mph.

But Brig Andrew Gadsby, a former cavalry officer now marketing manager at Vickers, said: "From one point of view the tank is dead. The 70-ton monster will be replaced by something that has the exact same characteristics." David Fletcher, of the Tank Museum in Bovington, Dorset, said: "They have been sounding the death-knell of the tank since bazookas were introduced in the Second World War."