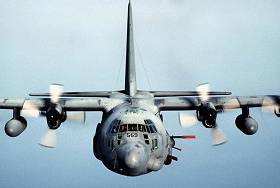 he latest round of attacks on al-Qaida and the Taliban regime saw an old workhorse being used in a new war over Afghanistan skies. News reports say the buzzing sounds over the target last weekend  initially thought to be helicopters  came from an AC-130 Spectre gunship.

Officials at the Air Force Special Operations Command in Hulbert Field, Fla., would not confirm that the AC-130 is being used in Operation Enduring Freedom. But one spokesman said that the aircraft is suited for air-to-ground operations over Afghanistan. "The core primary mission is ground support," said Air Force 1st Lt. Jeff Roberts, Air Force Special Operations Command spokesman. "It's there to take care of itself and anything else in the area."

Because of its slow speed and operation at low altitudes, the AC-130 is more vulnerable to anti-aircraft missiles, including shoulder-fired Stinger missiles, which are believed to be the most threatening element of Taliban defenses.

However, the use of the AC-130 suggests Taliban air defenses had been badly degraded, especially around populated areas. Defense Secretary Donald Rumsfeld last week said the United States controlled the skies over Afghanistan, and American aircraft could fly with little or no resistance from the ground.

The AC-130 is based off the C-130 cargo aircraft design and beefed up with a heavy weapons package. It is powered by four turbo-prop engines, and its most identifiable features are the guns jutting from the left side of the aircraft. Those weapons include a 40 mm Bofors cannon and a 105 mm howitzer. Some of the newest models also carry a 25 mm gun, to rain automatic fire on targets below.

It's virtually a flying tank. "I wouldn't want to be on the other side," Roberts said. "It certainly has those kind of capabilities. It's the same 105 mm the Army would use, except we take it airborne for pre-planned targets or targets of opportunity."

The weapons' accuracy rivals those of smart bombs launched from fighter aircraft. The Air Force labels the accuracy as "surgical." A sensor suite within the aircraft combines radar, television and infrared targeting, allowing the crews to hit targets in all weather, night and day.

The AC-130U model, the latest version, carries the capability to engage two targets simultaneously while carrying twice the ammunition of the other model in service, the AC-130H. According to Air Force fact files, there are eight "H" models and 13 "U" models in service. "It's a very accurate weapons system," Roberts said. "Exactly how accurate? You wouldn't want to count on it not being accurate."

The benefits of the AC-130 gunships are their armored protection and their "loitering" ability. Much slower than fighter jets, the turbo-prop engines allow AC-130s to circle for hours waiting for targets, or to provide protection for ground troops and convoys.

The AC-130 has a storied past. Introduced during the Vietnam War, Air Force Special Operations crews have flown the gunship in nearly every war since. They were called into action during Operation Urgent Fury in Grenada, suppressing air defense positions and attacking ground forces, enabling an airborne assault at Point Salines Airfield.

"Due to its immense girth and sluggish top end, the AC-130 is something of a sitting duck in combat conditions," said Graham Strouse, author of an in-depth look at the gunship in For Men Magazine. "The Spectre's spectacular destructive capabilities are usually limited to mop-up work, ground support, and air-base defense. It's a finisher, not a starter."

Most recently, the gunships have been flying over Bosnia-Herzegovina against key targets in support of NATO operations there. Still, the weapons are only as good as the crews that fly them, special operations command spokesman Roberts said. "The aircraft are operate by some of the most specialized and unique airmen in the Air Force," he said. "They're very specialized in what they do. They're not like most airmen. They are born and bred here in [Air Force Special Operations Command]. They spend most of their careers here. It takes a long time to train them."