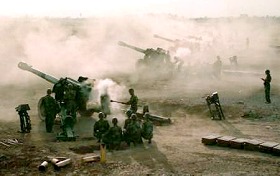 magine a booming China of 1.5 billion people that has intimidated Taiwan into effective submission, persuaded Korea and Japan to close the U.S. bases on their territory, and made a deal with New Delhi to divide Asia into spheres of Chinese and Indian influence at America's expense. What sort of China is that?

One that was imagined last summer - long before the current tensions between China and Taiwan - by a group of academics, former government officials and current Defense Department officials who tried to foresee Asian realities in the year 2025.

The group was assembled by Andrew W. Marshall, a legendary Pentagon official who heads the Office of Net Assessment, which tries to anticipate possible threats to American interests. Its job is to worry about the future.

The report of Marshall's annual "summer study" says on its first page that it "does not reflect the official policy or position" of the government. Its purpose, Pentagon officials say, is to prod the military bureaucracy into thinking harder about problems the United States may face in the not-quite-foreseeable future. Colleagues describe Marshall as deeply frustrated with the low level of expertise on China in the Pentagon.

"Asia 2025" rejects the view that Chinese-American relations might evolve gently and fruitfully. Whether strong or relatively weak, "China will be a persistent competitor of the United States," the report concludes. "A stable and powerful China will be constantly challenging the status quo in East Asia. An unstable and relative[ly] weak China could be dangerous because its leaders might try to bolster their power with foreign military adventurism."

Many China specialists dispute that grim conclusion, but Marshall's job is not to be diplomatic or reassuring - he is looking for future trouble. "Asia 2025" is a worst-case scenario. He and his colleagues had no difficulty imagining potential future problems involving China. For example: In 25 years, off-the-shelf cruise missiles and ballistic missiles will be available to China and other Asian nations on the global arms market. Satellite-based navigation systems will make those weapons highly accurate. Three Asian powers already have nuclear weapons, and the authors predict more will get them.

"As a result, states in the region may have powerful methods of . . . influencing the behavior of their neighbors that do not involve the threat or use of major forces for invasion, conquest or occupation of territory. Instead, force will be used and objectives will be obtained increasingly through strategies that seek to coerce, intimidate or deny access," the report says.

The authors of "Asia 2025" expand on that last point in imagined scenarios of future Taiwan crises. They begin with China deciding to try to force Taiwan to accept reunification on Beijing's terms.

China's first military step would be a naval blockade of Taiwan, according to one scenario. The United States would send ships to challenge the blockade. Then the Chinese would threaten missile attacks or hit American vessels, persuading Washington that it has to choose between going to war and pulling back. Hesitation in Washington or a decision to retreat would prompt the collapse of the Taiwanese stock market, currency and economy, and the Taiwanese establishment would quickly accept the deal Beijing is offering.

The United States' failure to support its ally persuades other Asian powers that they, too, must accommodate the rising China. Japan makes a deal with Beijing for security and autonomy, in return agreeing to close all U.S. bases on its territory. A reunified Korea, swept up by nationalist sentiment, also expels the Americans. China effectively dominates the entire region. "An Asia it dominates but does not conquer or occupy is China's goal," the study says.

Parts of "Asia 2025" are, its authors say, guesses -"highly imaginative descriptions of things that could happen." Other sections are factual. For example, projecting from current trends, the study concludes that if Asia continues to prosper, its consumption of energy will be three times Europe's by 2020.

But the "Asia 2025" authors also imagine another China whose economy has crumbled and whose communist regime is toppled by a military coup. "We are concerned," the authors write, "that many people in the defense planning community believe that the future will be largely a projection of the present . . . . [But] we are likely to be surprised by the 'non-linear' nature of the events and forces that shape Asia's new strategic environment."