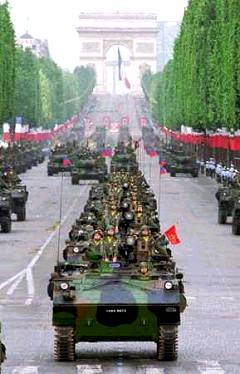 he French government has announced that it is immediately ending the military draft, a move that ends that country's involvement with a system of mass conscription that helped to promote national integration and contributed to the rise of mass-participation democracy there.

French President Jacques Chirac and Prime Minister Lionel Jospin said in a joint statement on 27 June that they were eliminating the military draft now  more than a year ahead of the time the French government had announced in 1996 when it revealed plans to move toward an all-professional army. The two said that they are able to do so because the French army currently is attracting enough recruits to make the draft unnecessary.

The move seems certain to be politically popular, especially among young men who might have been forced to serve in the army. Indeed, members of that age group had occasionally protested what they saw as the French government's hesitation in following the example of many other Western countries in doing away with conscription.

But the role that military service played in both French national integration and the rise of democratic politics there has prompted some analysts in France and elsewhere to ask about the consequences of the end of the military draft on society and politics.

Two centuries ago, service in the military not only integrated people from the various regions of France into a single French nation by giving them a common experience with a common language, but it also empowered them to play a dramatically expanded role in the state. The same pattern was repeated elsewhere, and as other governments came to rely on mass armies, they too frequently found themselves increasingly dependent on popular attitudes.

No government that had to rely on a conscript force could afford to ignore popular attitudes for very long. If it did, it would find itself faced with draft resistance of one kind or another, forcing the authorities sometimes to turn to repressive measures to enforce their will but more often to change the direction of their policies. And consequently, the draft and the large armies it required contributed to more participatory politics and even to democracy.

Now, with France ending the draft, most major Western countries have either abolished or suspended it. The governments involved have said that they no longer need large militaries and that ending a draft which affected only a small portion of young men and often those of the most disadvantaged parts of society was only fair.

The absence of a draft and the near universal experience of military service among young men are already having some serious consequences for countries that have made this choice. First, young men no longer have the same common integrative experience that the military provided, a lack that has reduced national cohesion and may leave some of them alienated and isolated from the broader society.

Second, governments which have professional militaries can ignore the attitudes of the broader population concerning any particular use of the armed services for far longer. That in turn can mean that they may be able to engage in military actions longer and with greater political impunity than would have been the case with draft-based militaries.

And third, the absence of the common experience that the draft often provided and the checks on the government that conscription imposed together mean that democratic societies may lose social cohesion and control over their own governments in ways that threaten the traditional understanding of democratic governance.

At a time when most governments seek to avoid the use of force, these may not seem like enormous problems. But the historical record suggests that such a peaceful period is unlikely to last. And should it end, the absence of a tradition of conscription may complicate the lives of people living in democracies  and even the nature of democracy itself.